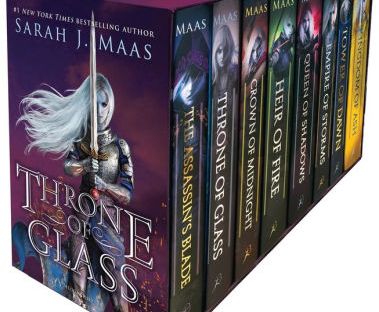 I had seen the popularity surrounding Throne of Glass by Sarah J Maas for a few years now, yet it took me a while before I decided to check it out. It’s only been within the past couple of years that I’ve truly become spend-happy when it comes to buying books, and until then I mostly relied on being able to find something in the library, which isn’t always the case with extremely popular books.

Barely a chapter into the first book and already I found myself understanding the craze. The first book drew me in with its wonderful competition for the title of King’s Assassin. I found Celaena interesting, although there were certainly times when I may have rolled my eyes a bit. I mean, she’s a deadly assassin, she’s insanely smart, she has an obsession with books, and chocolate.

Not going to lie, when I read A Court of Thorns and Roses, I saw how much Maas has progressed since her first series in how Feyre was less of Mary-Sue than Celaena. She’s still likely somewhere on the spectrum, but Celaena almost seems as though she could easily take the cake there. Particularly when the bomb drops in a later book and it’s revealed that she’s Terrasen’s missing Princess Aelin.

Even with the strong Mary-Sue vibes given off from the main character, I found myself thoroughly enjoying the series. Just as I could see Maas’s writing progress with more well-rounded characters in her second series, I could see the same progression within this series, particularly as it went on. The first book focuses primarily on Celaena, Dorian, and Chaol. The last book has a large main cast who are all integral to the plot, and manage to be interesting and well-rounded characters.

The series is a lovely blend of action and fantasy, which is just what I needed when I first picked it up. The writing is compelling, and the characters interesting (particularly if you can get past any eye-rolling moments that might occur when you see badass assassin Celaena make herself sick by gorging on chocolates).

I also found it quite wonderful to see just how much the series progressed from what started as a simple competition for the King to a battle that could give Middle Earth a run for its money.

I will definitely have to be reading this series again sometime. After I’ve gotten over my current book hangover thanks to Kingdom of Ash, the final book in the series.

View all posts by bookbluff92